Turmeric benefits are numerous, including its wide use as an anti-inflammatory agent. For those of you wanting to know “What is turmeric?” we will learn that as well as the benefits of turmeric, turmeric side effects, and where to buy turmeric.

Turmeric comes from the root of the Curcuma longa plant, a perennial flowering herb in the ginger family.

This herb is grown and harvested on a large scale in tropical climates. It is mainly grown in India where it is used as the primary ingredient in curry powder.

Turmeric is also used in the preparation of mustard to give it a bright yellow color.

The active ingredient in turmeric, which causes its yellow pigmentation, is called curcumin. The root of the Curcuma longa plant is used to produce turmeric power for culinary and herbal remedy use. Typically, the turmeric root is boiled and dried before use.

Ayurvedic medicine has studied and utilized turmeric for thousands of years. 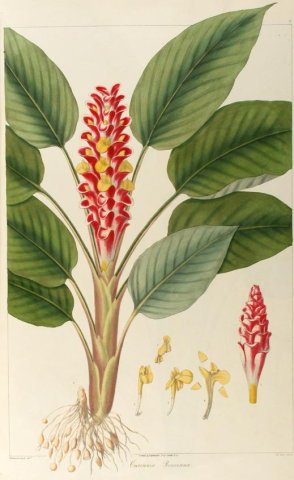 Turmeric Benefits
Turmeric is a powerful anti-inflammatory, and its effects have been noted to be as powerful as drugs such as hydrocortisone and ibuprofen. It also breaks down toxins and stimulates the immune system.

Studies have revealed that curcumin acts as a very powerful antioxidant. In this role of antioxidant, curcumin is able to neutralize free radicals, substances that can cause a great deal of damage to healthy cells. This makes turmeric especially useful in diseases such as arthritis where free radicals can wreak havoc to joints, causing painful inflammation.

Studies have also shown turmeric to be just as effective as certain rheumatoid arthritis medications for reducing morning stiffness and joint swelling.

The combination of antioxidant and anti-inflammatory effects of turmeric accounts for the popularity of this wonderful herb in bringing relief when used regularly.

Turmeric For Skin
Ancient cultures have long used turmeric paste to heal skin conditions, including ulcers, acne blemishes, and itching skin from eczema or psoriasis. Infants have been treated for diaper rash and to soften sensitive skin. For more serious conditions, turmeric is mixed with coconut oil and applied to the irritated areas.

People from India and China also have many other uses for turmeric, including herpes, leprosy, mumps, measles, chicken pox, snake bites, insect stings, and ringworm.

One traditional recipe for turmeric paste uses a small quantity of turmeric powder, mixing a small amount of lime juice and water to prepare a smooth paste. This is then applied to the affected areas with great improvement of the condition.

An old remedy for the complexion utilizes turmeric powder mixed with milk to make a fine paste. This paste is then applied to the skin of the face and neck for half an hour. Can be used on the lips as well to remedy chapped lips.

Turmeric and Cancer
Another of the well-known turmeric benefits is its ability to suppress tumors and help prevent cancer in those who eat a lot of curry. In fact, studies have shown turmeric extract to completely inhibit further grown of cancer cells, or metastasis.

Those whose diets are rich in turmeric are shown to have a lower chance of breast, prostate, lung, and colon cancer.

Consumption of turmeric and cancer prevention appear to go hand in hand based on many studies. These studies show that turmeric consumption causes cancer cells to die and also enhances the cancer-fighting benefits of other well-known cancer fighters such as green tea.

Turmeric Side Effects & Precautions
Those who have gallstones or bile obstruction issues should not use a turmeric supplement unless recommended by a healthcare provider because of turmeric’s ability to induce bile flow. Turmeric should also not be used in pregnancy or while breastfeeding.

Where to Buy Turmeric Supplement
Turmeric capsules, turmeric tea, and turmeric extract can be purchased at most healthfood stores, or you can visit one of our recommended partners.