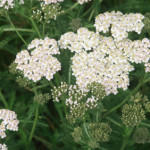 Yarrow herb is a native plant to many areas of Asia, North America, and Europe.

It is known by many other names including bloodwort, milfoil (or knights milfoil), and old man’s pepper.

It is used in many herbal remedies and is believed to have wide ranging health benefits.

Yarrow has been used for medicinal purposes as far back as 3000 years ago when the leaves were made into a tea.

In ancient times, toothache was eased by chewing on the fresh leaves.

The leaves were used on wounds to stop bleeding and were even used to help circulation problems.

Yarrow uses and benefits include:

A yarrow poultice is very good for healing skin problems such as burns, cuts and bruises. It is also know to reduce swelling, and warm yarrow tea can be used as a wash for skin problems like eczema and psoriasis. It is also thought to help sufferers of hay fever.

Yarrow herb can be used in tinctures and infusions, which can be bought as ready-made tea or made from fresh yarrow leaves. It is also available as yarrow essential oil.

Yarrow Side Effects
There are no known side effects to using the yarrow herb, but, as always, exercise caution when taking supplements. If unsure, consult with a medical practitioner for advice before use, particularly if pregnant or already taking medications for health issues.